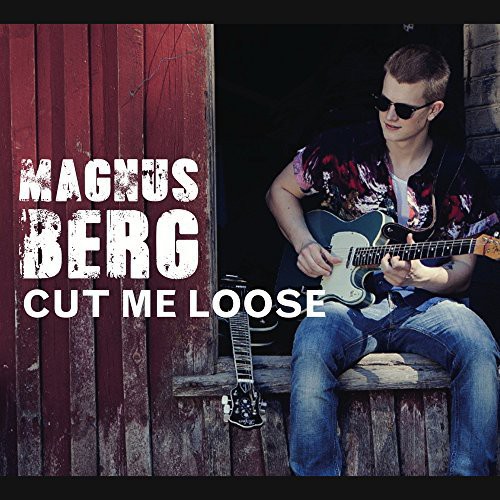 Magnus Berg Cut Me Loose (Screen Door Records) The blues literally reaches across all boundaries. Adding to it's seemingly mystic power to entrance musicians is the ongoing phenomenon of amazingly young aspirants. Sensational 18-year old Norwegian guitarist Magnus Berg began playing at seven, performed onstage at 12 and played Buddy Guy's Legends in Chicago at 17. During his family's yearly sojourns to the warmth of Florida, and as touring US artists would pass through Norway, Berg began to catch the eye of many in the Blues community at a very young age. In late 2012, singer/songwriter Kirsten Thien was captivated by Berg's guitar solo during a cameo appearance with Mike Zito in a Blues club in Florida. This chance meeting would be the start of a cross-Atlantic collaboration as Thien began co-writing with Berg and added his blazing lead guitar work to her live band, touring together in the USA, Norway, France, Germany, Belgium and The Netherlands. All the while, Berg also leads his own band doing shows on the weekends while attending high school back in Norway. As the new record took shape, Producer Erik Boyd was recruited to produce and Thien eventually signed Berg to her label, Screen Door Records. They inked the deal on a rainy day in Brittany as their August European tour came to a close. Singing, playing and writing, Magnus Berg leads a taut band of Bjorn Tore "Daffy" Larsen (harmonica), Håvard Sunde (drums) and Roy Oscar Pettersen (bass), on seven originals and three classic covers. The heavy, riff-rocking "Cut me Loose" has Berg growling "All cramped up in the back seat, my six-string is my only friend. Out here I need money again, won't you cut me loose?" as Larsen wails in sympathy and Berg rages instrumentally. "One Way to Please You," co-written by Thien, swings exuberantly as Berg bemoans, "If there was one way to please you, Lord knows I'd be your man. But you keep me guessing, God knows I don't understand" while he and Larsen tag-team rollicking solos. A stomping boogie shuffle drives "Drifting" with Berg using his authentic blues vocals to lament "The way you treat me, just ain't right. I can't even, I can't sleep at night. I'm drifting, drifting away from your heart. In my life now, pretty baby, loving you seems to be the hardest part." The hypnotic slow blues "When You Leave Me" builds tremendous musical tension with a memorable riff while Berg confides "Just gonna sit here and look out my window, I'm gonna look at the view so fine. I'm gonna think about the days when you loved me, and the days when you were all mine," his slithery slide guitar as mournful as his plaintive vocals. A cover of "Kansas City" features sprightly country blues guitar picking in a refreshing "olde tyme" version, while a steaming take on Freddie King's classic instrumental "San-Ho-Zay" highlights Berg's exceptional chops in a trio arrangement. "When It's Gone" continues the dynamic selection of styles as Berg's melancholy, country-slide guitar underscores Thien singing the hauntingly poetic "A wisdom came upon me in the nighttime. A flash of hope was gone before I woke. I can chase it all I want, but one thing life has taught me. When it's gone it's gone and that's no lie." The Muddy Waters standard "Hoochie Coochie Man" is inventively re-imagined with saucy slide guitar in a raunchy arrangement. "St. Pete Boogie" lifts the spirits via a propulsive classic boogie riff in an inviting road song with Berg offering "I'm driving north. On the two seventy-five. I'm going to Saint Pete. I'm sitting in the back seat. Tryin' to write a good song" and admirably achieving his goal. "One Too Many" closes the invigorating set with a finger-popping jump blues as Berg tries to excuse his bad behavior with "Last night my baby showed up, she wanted to know what was going down. She heard a thing or two 'bout me and her friend sneaking around. I had one too many...but I won't do it again," his aggressive guitar licks underscoring romantic desperation. Every new contemporary musician dedicated to the blues is cause for celebration. When one as talented and genuine as Magnus Berg explodes on the scene it is a remarkable event. His robust debut displays maturity and true blues expression well beyond his years in what promises to be an outstanding career. ===== Performed by The Magnus Berg Band: Bjorn Tore 'Daffy' Larsen (Harmonica), Håvard Sunde (Drums), Roy Oscar Pettersen (Bass), Magnus Berg (Guitar, Vocals) Additional musicians: Kirsten Thien (Vocals on "When It's Gone"), Erik Boyd (Bass, Accordion, Acoustic Guitar on "When It's Gone"), Magnus Westgaard (Upright Bass on Kansas City Blues), Ola Overby ( Drums on "Drifting", "Cut Me Loose" and "San-Ho-Zay"), Kristian Koppang (Keys) Studio Engineer: Håkon Hoye at Big H records Recorded by Håkon Hoye at Big H Records (except "When It's Gone" recorded at Hideaway Studios, St. Petersburg, FL) Mixed and Mastered by Dan Myers at Dirt Floor Studios Photographs by Christian Berset Artwork and Design by Julianne Warren Produced by Erik Boyd c All rights reserved.